This section describes how to edit cues within a cue list. To copy, move or delete an entire cue list see the section Copying, Moving, Linking and Deleting.

The easiest way to edit a cue list is using the Playback View window (press Open/View then the Select button for the cue list to open it). This shows a grid with each cue and allows you to change most features of the cue. Select the item you want to change in the grid, and the softkeys will offer you options for what you can change.

To change multiple cues at once, draw a box across the items you want to change.

Also, the Intensity View window is useful for seeing the state of all fixtures.

You can edit the value of every fixture in each cue using the Cue View window. Press the View button in the column View Cue at the right hand end of the Playback View window. 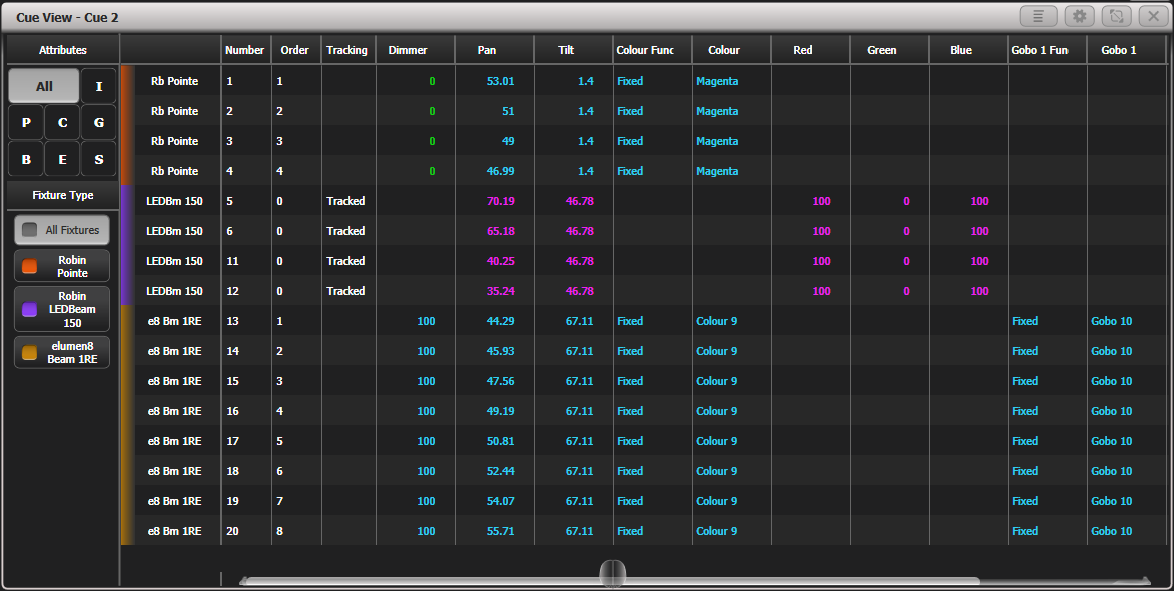 You can then click on the values you want to change and edit them using the softkeys.

There are several ways to copy or move cues within a cue list. You can also move cues to other cue lists.

You can use Unfold (as described in the next section).

To move a cue you can either click and drag the cue in the Playback View window, or click on the cue number and use the Change To softkey to enter the new cue number - once you have changed the number the cue will move to its correct position in the list.

To delete a cue press Delete, select the cue in the window, and tap the cue again, or press Enter or Confirm to confirm.

You can also use a command-line style series of keypresses:

As an alternative way of editing a cue list, the Unfold button places each cue of the cue list on one of the playback faders. This allows you to fire and edit each step individually as if it was a stand-alone cue.

The Tracking View window allows you to see and edit how dimmer levels and other attributes are tracked between cues in a cue list. This is really useful to tidy up a show after a frantic programming session if you've saved hard values accidentally instead of using tracking, or to work out where an incorrectly tracked value is coming from.

To show the Tracking View, use the context menu in the Playback View to select View Tracking. 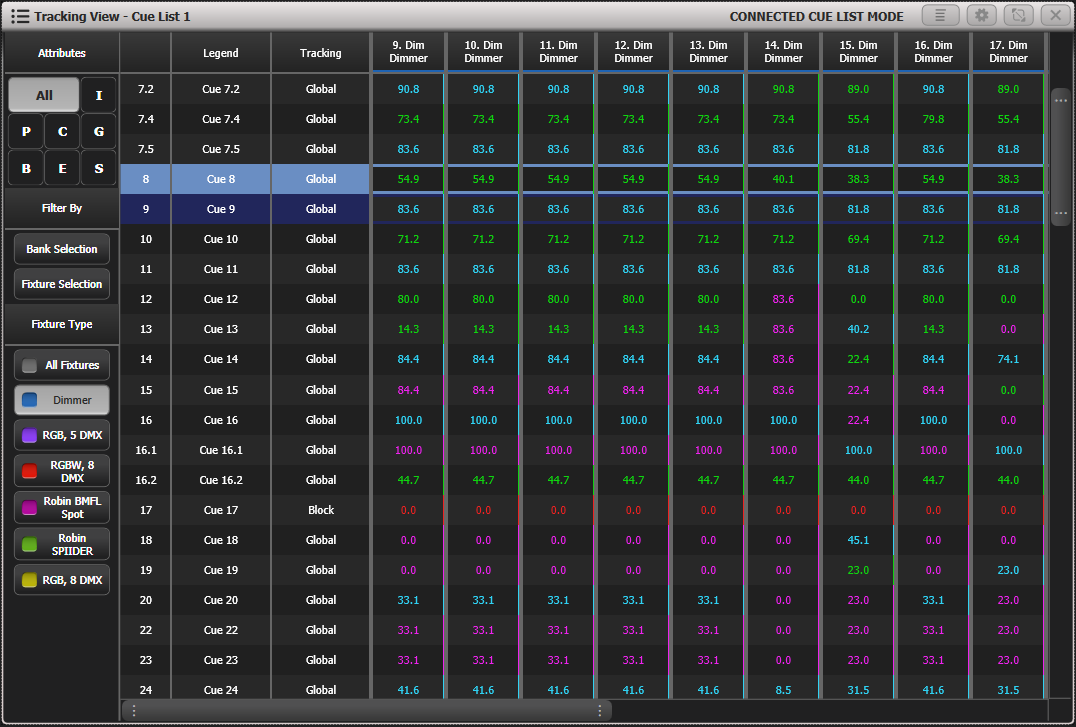 The cues are listed in the grid showing the attribute values stored in each cue. The tracking state is shown by colour:

On the left side of the window, you can filter the fixtures and attributes shown in the grid to show only:

If any fixture or attribute has been set to non-global, then a letter after the value shows T (Track), B (Block), C (Cue Only) or S (Solo).

Using the window appearance menu button Cog you can change the following display options for the Tracking View:

You can also show or hide various parts of the display to make more space in the window:

In the Context menu for the Tracking View screen there are Sort and Filter options:

For the Filter options

Because fixture settings in a cue list are tracked through from previous cues, if you want to edit a setting you need to find the cue where it was originally set.

The Update function will go back through the cue list from the currently fired cue and automatically update the correct cue.

If the attributes you have changed were tracked through from a previous cue, Update will update that cue rather than the current one.

You can also edit cues in a cue list while you are running it without using Unfold.

You can edit the times for a cue using the Live Time and Next Time buttons (not on all consoles) as follows:

You can also use Unfold to set the times as described in the Unfold section above.

You can edit cues while you are in the Record Cue List menu.

The Update Mode softkey allows you to set how changes in the cue will be tracked.

Updating Values in a Range of Cues​

You can merge or replace values in a range of cues in a cue list (or a chase). This can be done either from the keypad or from the Playback View.

From Playback View, press Record then select a cue or range of cues by touching and dragging over the required cues. Select Merge or Replace (or press Enter to merge). The current programmer will be merged into all of the selected cues.

From the keypad, connect the cue list (or chase) and press Rec Step. Then use the syntax n THRU m to select a range or n And m to select cues which aren't together. The selected cues will highlight in red in the Playback View if you have it open. When you have selected all desired cues press Enter, then select Merge or Replace (or just press Enter again to merge).

You can temporarily disable a cue using the Disable option at the right hand end of the Playback View window. Tick the Disabled checkbox and the softkeys let you set Cue Disabled Yes. When a cue is set to Disabled it will be skipped. This can be a useful way to remove a cue, but still be able to put it back in later.

Extracting a Cue from a Cue List with Include​

You can reload a single cue out of a cue list into the programmer using the Include function. Press Include, select the cue list, enter the cue number to be included, then press Include Cue.

If you want to do this from the currently connected cue list, Press Include, Connect/Cue, type the cue number, Include Cue.