Combining Cues with HTP and LTP

Playing Back a Cue 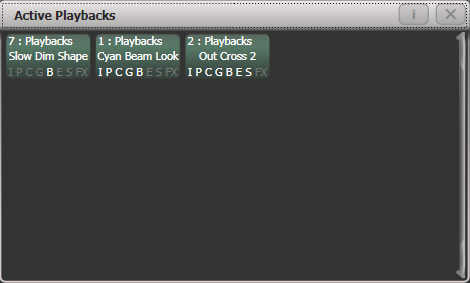 You can release a running playback to its previous state by pressing Release (Off button on Pearl Expert), then the select button of the playback to be released. Channels will release back to their state in the previous playback until no playbacks are left to be released. If the Release to Home setting on the Release menu is Enabled, channels will go to the power-on state, which you can program (see next section). If the option is disabled, channels will remain in the state of the last playback. You can release all running playbacks by pressing Release then Release all playbacks.

Releasing a Whole Page of Playbacks

Programming the Release / Power On State

Press Off button followed by a playback to open the 'Off Playback with Mask' menu. Select the fixtures to be turned off, set mask as required and then press Off to turn the fixtures/attributes/shapes off.