Titan Mobile is a USB wing which plugs into a Windows PC or laptop running the Titan Go software. See minimum PC specifications for details of the PC requirements. 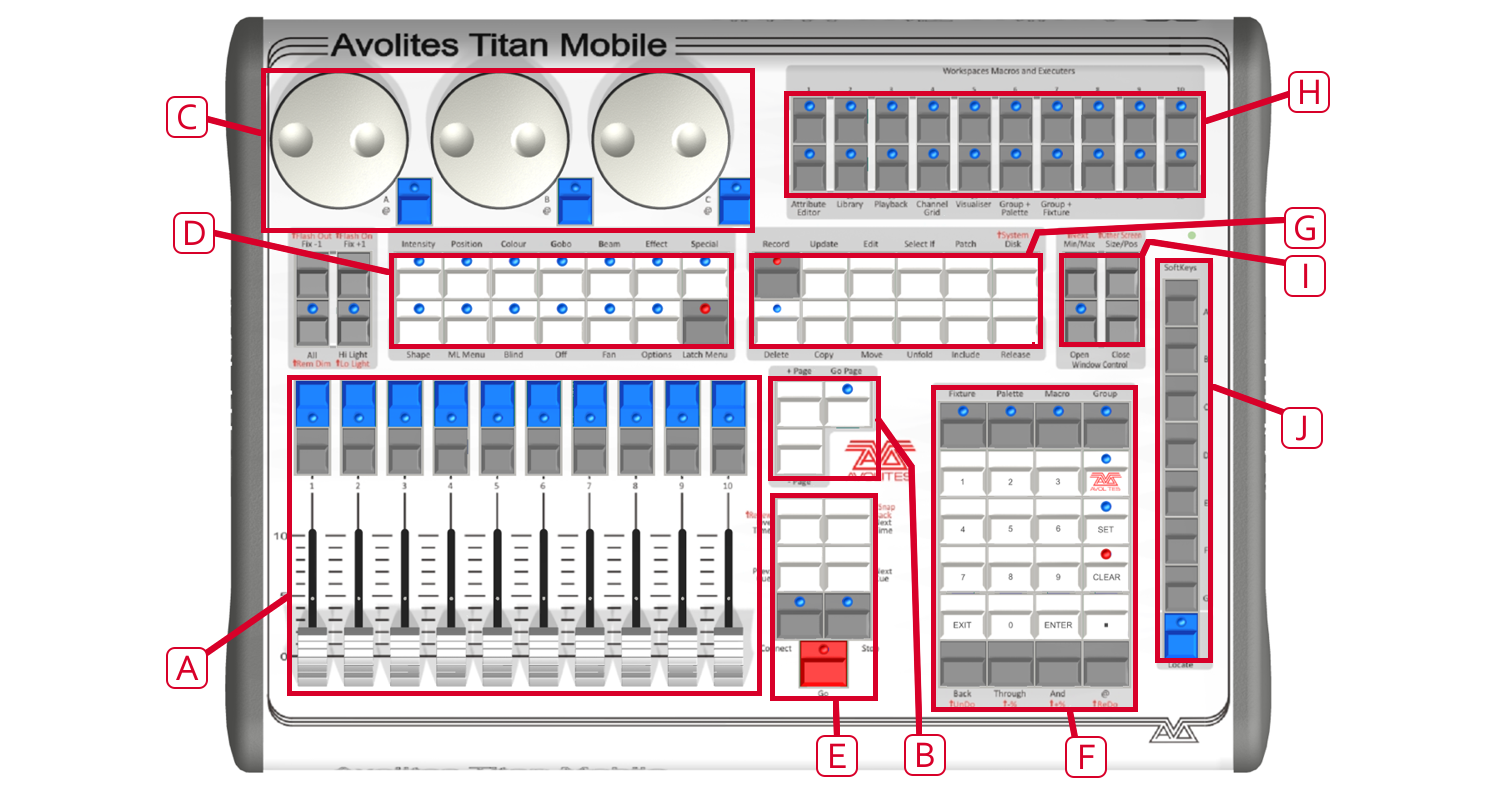 A The Playback faders are used to store and play back cues or chases.

B The Page Select buttons let you change to a different page of playbacks. The bottom of the screen shows information about each playback.

C The Attribute Control wheels are used to set control values (attributes) for the fixtures, and to set chase speeds and fades. The bottom right corner of the screen shows information about the attributes being controlled.

D The Attribute select buttons are used to select which attributes of a fixture (e.g. colour, gobo, position) are going to be controlled using the Control wheels. The buttons have lights on to show you which attributes are active. Attribute functions such as Fan and Shapes are also controlled here.

E The Chase and Cue List control buttons allow you to start and stop chases and cue lists, and move about in the list.

F The Numeric keypad and other control buttons are used to enter values and change controls on the system.

G The Function buttons are used to carry out functions such as storing cues, copying, saving to disk, etc.

H The Workspaces, Macros and Executers buttons are programmable buttons which can be used to store cues such as strobe cues, workspaces (screen layouts), or button macros.

I The Workspace Window select buttons are used to set which windows are shown on the screen.

J The Menu Softkeys (labelled A - G) are used to select control options. The right hand side of the display shows what each one will do. - if you are using a touch screen computer you can touch the softkey on-screen instead of using these buttons. The options for each key change depending on what the console is doing. Softkey commands are shown in the manual like this: Edit Times

K Four Workspace Windows may be shown on the screen. These contain touch buttons to control fixture selection, palette selection, groups, shapes, attributes, and so on. Visualiser may also be shown in a window.

L The system Menu softkeys are down the top right hand side. You can select these by touching or clicking them, or by using the menu buttons on the right hand edge of the control panel.

M System prompts are shown just to the left of the menu keys. Below that are Context buttons which appear when relevant to the operation you are doing.

N The Workspace Buttons allow you to quickly select and save different workspace screen layouts.

O The Wheels display shows the current attributes available on the 3 wheels. The Attribute status display above that shows which attributes are currently active or modified.

P The Playback information shows the legend and other information about the playbacks on the 10 faders.

Q Four DMX outputs are provided on XLR, and a MIDI input.

R USB to host computer. The current version of the Titan Mobile panel has only one USB socket rather than the original 2 shown in the picture above. Normally the panel is powered via the USB connection. Some laptop USB ports may not provide sufficient power for the panel, in which case the DC power input  S can be used to connect an external 9V DC power supply, available from Avolites.

T The PE socket / stud is to allow you to ground/earth the panel, which can help resolve DMX problems if your laptop is not earthed.