Once Titan and the Ai server(s) or Prism Zero applications are linked up, you can start controlling them from the console.

The Media Browser allows you to upload media content directly to the Ai server or the machine running Prism Zero from the Titan console. You can also create new media banks on an Ai server. Media content will be automatically transcoded to the AiM codec as required by the Ai system. This is very handy when you are handed a last-minute media file at the front of house position.

As with other windows, the media browser window is opened from the Workspace Window select buttons (double press the Open/View button to show). 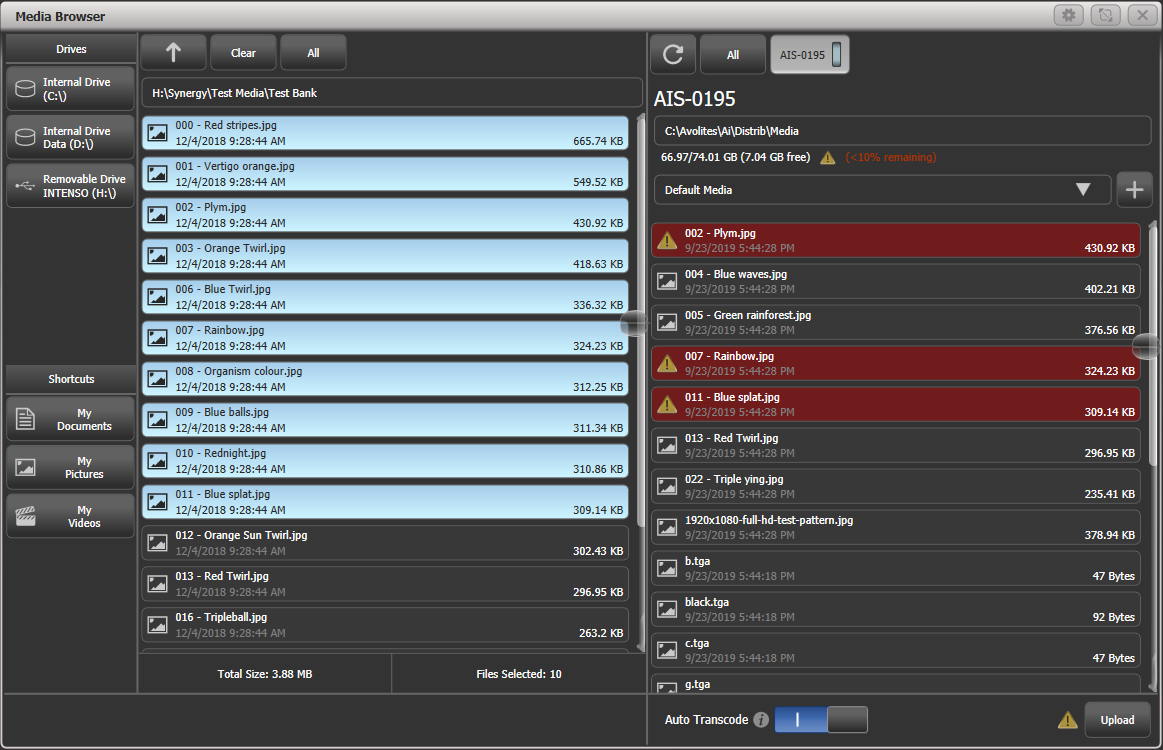 If the server already has files on it with the same names as files you have selected for transfer, the files will be highlighted in red as a warning. 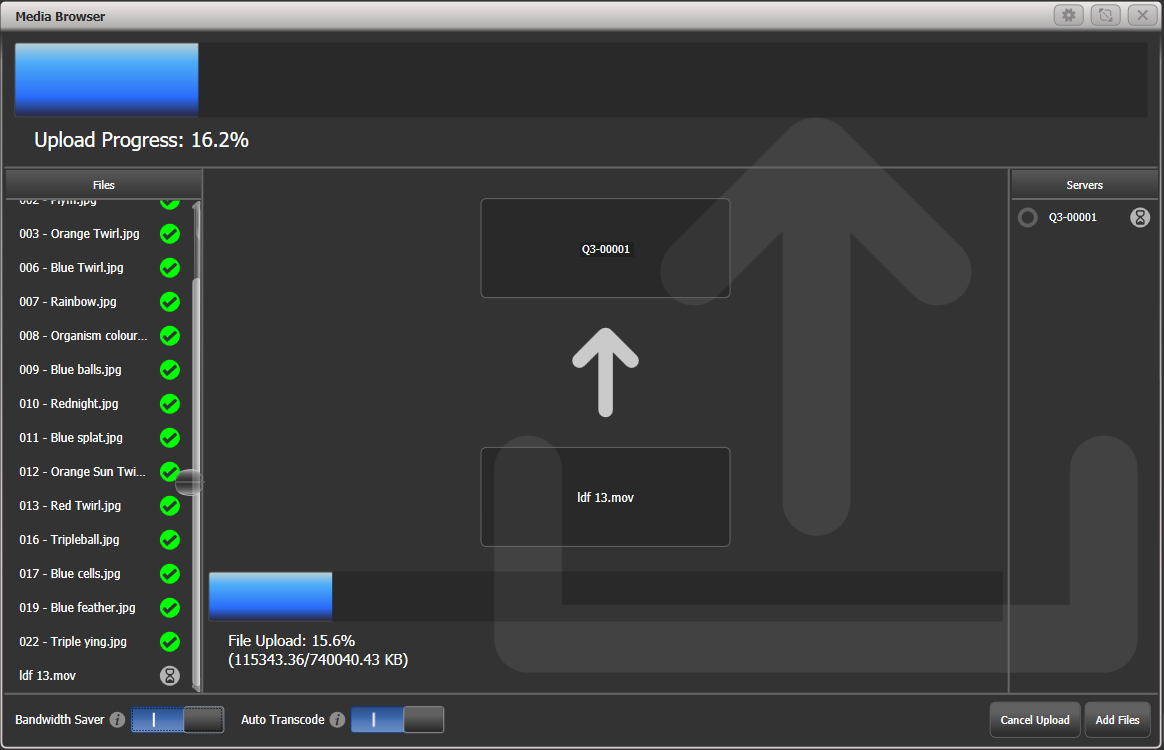 You can also turn off the automatic transcoding to AiM codec, but normally we would recommend that this option is left on. Once the files are uploaded, any requiring transcoding are added to a queue in Ai or Prism Zero. You can see the progress of the transcoding by viewing the clips in the Attribute Editor, see below.

The Video Multi View window allows you to view any of the layers being produced by the Synergy layers, or any of the combined surface outputs on an Ai server. In addition you can view any other NDI streams available on the network, so for example at a broadcast event the broadcaster could feed you the program output or individual cameras to check lighting levels. 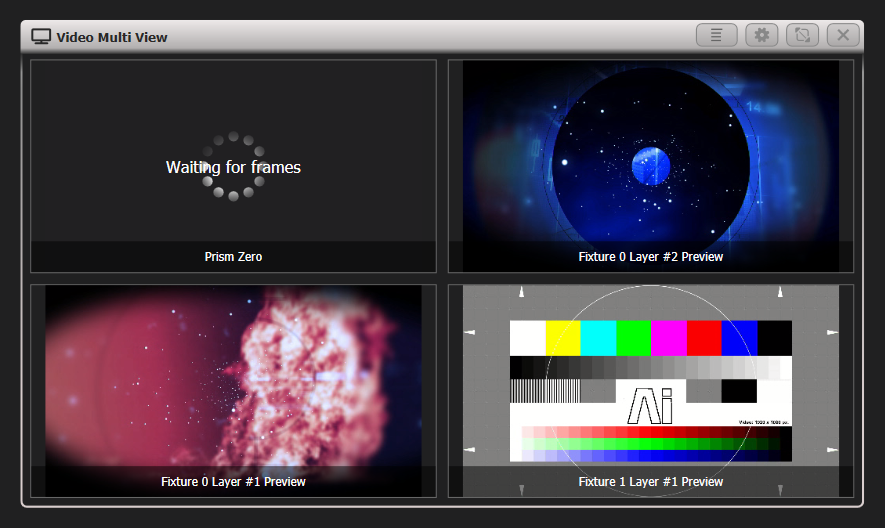 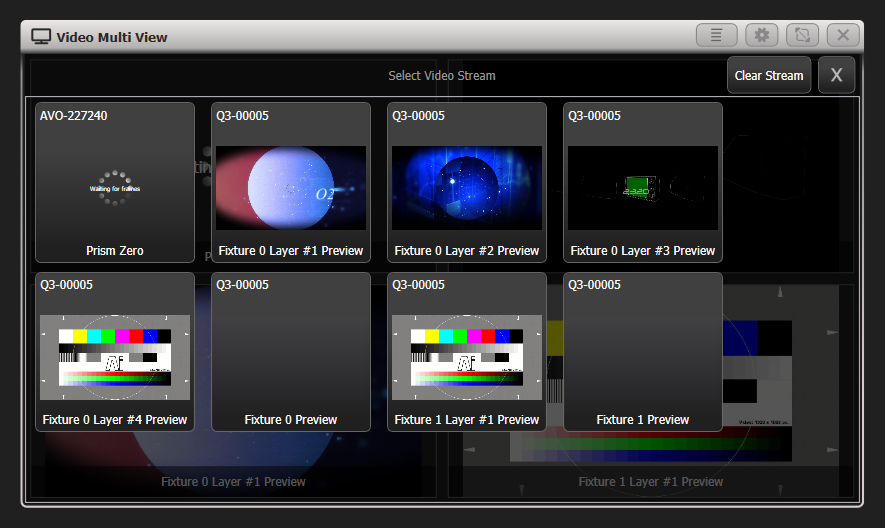 Once you have selected one or more media layers to control from the Synergy Fixtures window, the Attribute Editor lets you play back and manipulate media on those layers (you can also use the wheels and Attribute Bank buttons.

The most important attributes are Intensity, which set the output level of each layer, and Media Selection which lets you choose the Bank and Clip to play. But you can also control all other functions of Ai server such as adding FX and colour, or the smaller range of functions on Prism Zero layers. 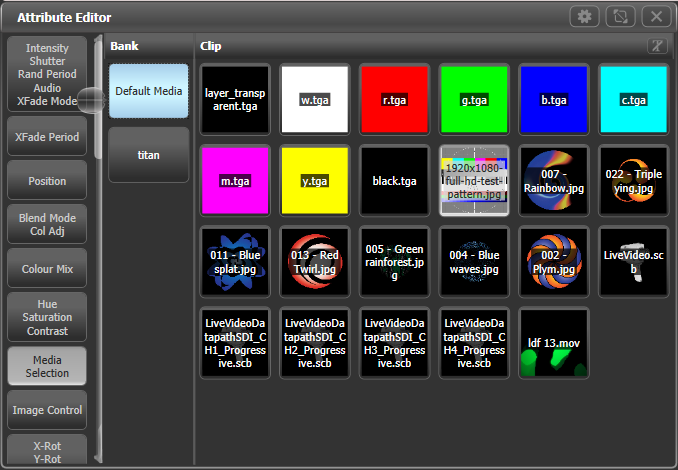 In the Media selection window, in the Clip tab, if you click on the T button (top right) or the caption at the top of the tab, this will toggle the clip name display on and off. This can be useful for long names which obscure the picture; on the other hand if you have lots of clips which look similar, the name display can be useful. 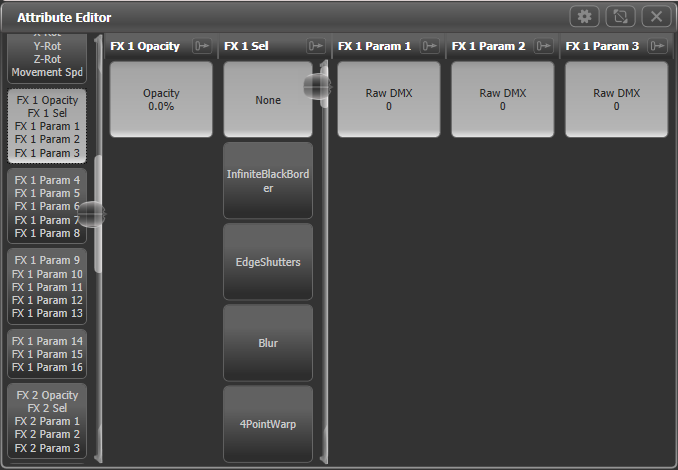 Often you might want to output video content to lighting fixtures patched on the console (for example if you have LED screens with fixtures around or in between them). The pixel mapper can directly play back media clips from the Ai server or Prism Zero. On an Ai server these can be sourced from individual layers or from surfaces (combined layer outputs). The surface outputs do not need to be connected to a physical output on the media server.

The media clip selected in step 1 should now be playing back over the fixtures you selected. The pixel map effect is now linked to the Synergy surface so you can change the clip which is playing using Attribute Editor or from programmed cues and you will see the change on the fixture outputs. 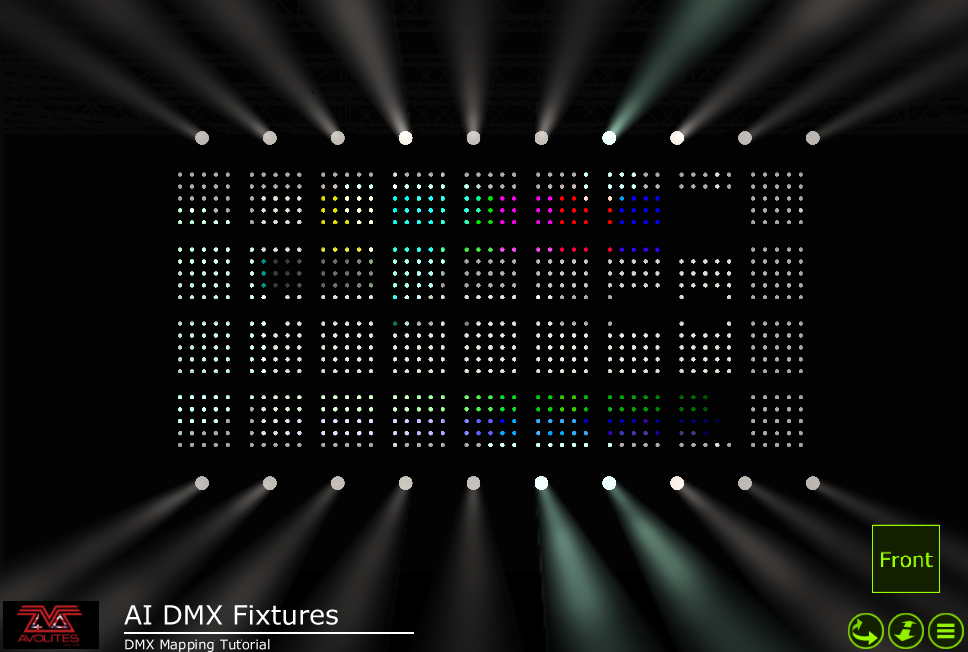 This option will overlay the media output on the fixture layout grid to help you see where fixtures need to be positioned. You need to select which layer or surface you want to overlay. 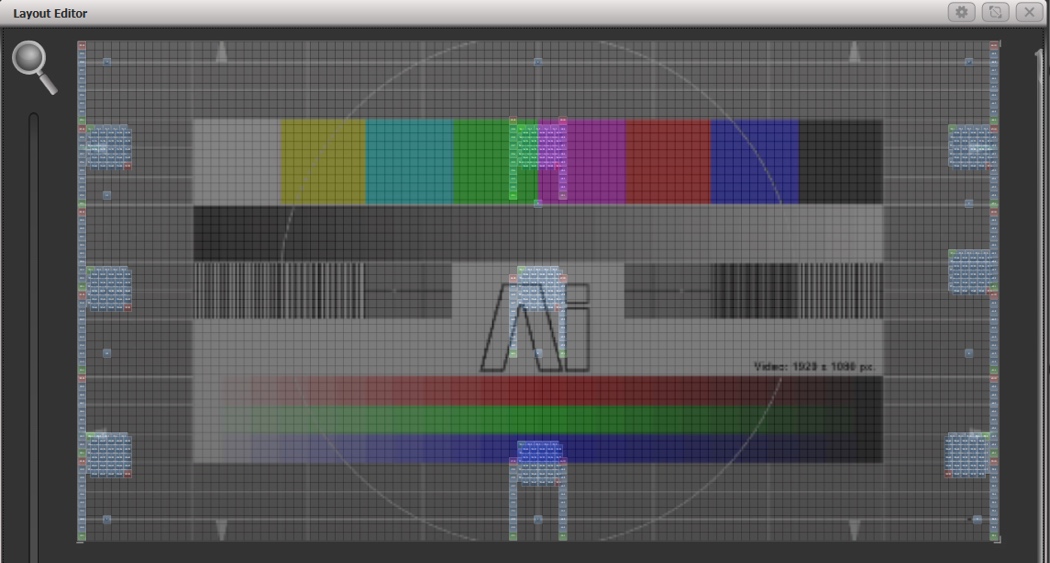 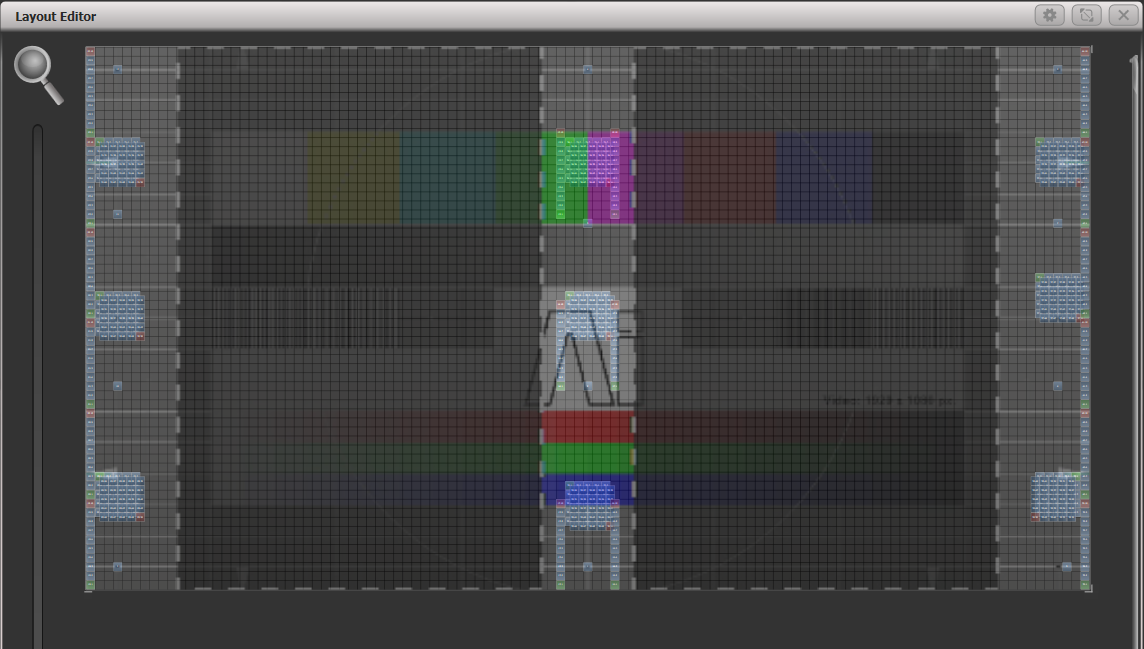 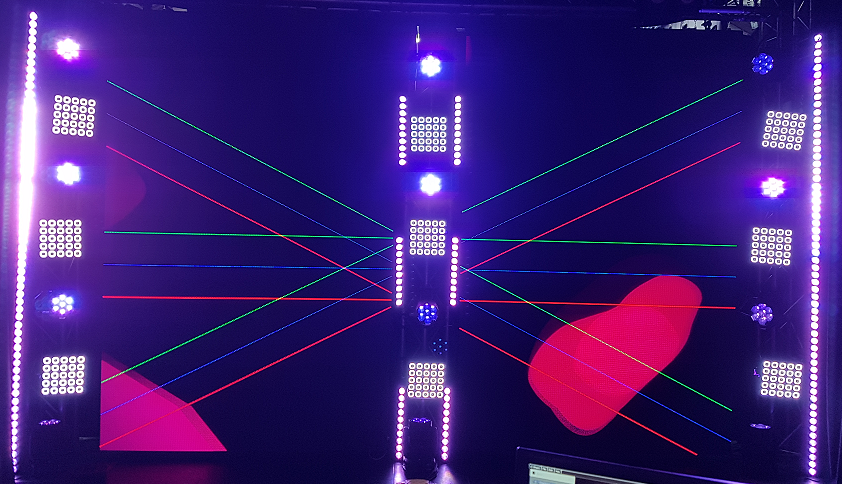 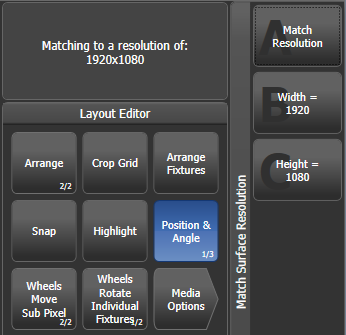