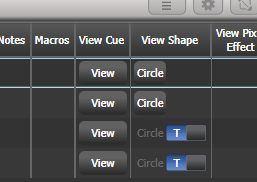 If the Shape Tracking option in Cue list options is not enabled, shapes in each cue are independent from each other. If an identical shape (with the same size and speed) is saved in a following cue then the shape will continue running rather than restarting.